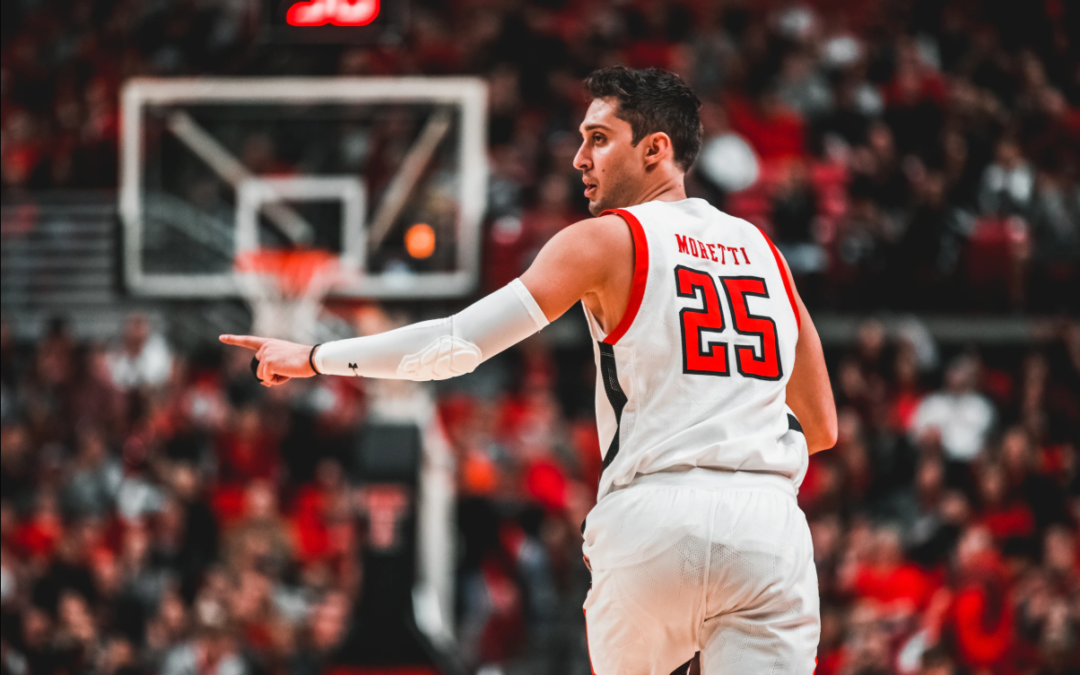 When the 2019/2020 season, Davide Moretti’s Junior season, began on November 5, 2019 the Red Raiders played their first match at Supermarkets Arena in Lubbock against Eastern Illinois University. Texas Tech made five consecutive victories in the first seasonal matches, which however did not help to dispel the doubts of the American analysts, who however attributed to Coach Beard and his staff great credit for the triumphant past season. Since the beginning of the year, in fact, the college basketball experts had several question marks about the finalist team of the last NCAA tournament, two above all were the young age and the physical size of the roster not competitive with the top national teams, especially in the painting.

At the end of November, the first demanding tests arrived, which coincided with three consecutive losses for Texas Tech against Iowa of the revelation Garza (nephew of Teo Alibegovic), Creighton and DePaul. These games highlighted the difficulties of a group that was not yet a team and that had not yet assimilated the defensive and offensive concepts of Chris Beard. 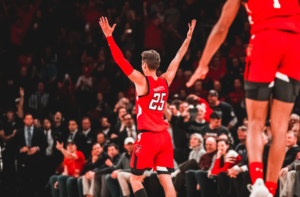 On 10 December the lights of Madison Square Garden came up for Moretti and his team who in Jimmy Valvano Classic faced one of the toughest opponents of the moment: the Cardinals of Louisville, #1 in the national ranking, who presented themselves in the most fascinating arena of the world ready to devour the Texans who were experiencing their first real big moment of difficulty of the season. The reaction of the Red Raiders was amazing: they put in a careful, solid and energetic performance like never before that led them to the 70-57 victory. A magical night also for TTU’s #25, Davide Moretti, top scorer of the match with 18 points scored and two consecutive bombs that bent the opponents in the final sprint.

The very positive impression left after this prestigious success was only a flash, however, as Texas Tech continued to alternate between unconvincing and more solid performances. Even the victories that followed the magical night of New York did not convince the most skeptical.

The very difficult Conference of the BIG XII began with a large home victory over Oklahoma State, but the journey in such a tough Conference, soon put the Coach Beard boys in front of opponents who made them pay dearly for certain limits.

The Red Raiders during the season suffered four home defeats in BIG 12 against Baylor, Texas and Kansas and against Kentucky in the SEC challenge, all painful. In addition to the 6 home successes, they have gained three major home wins with Texas, Kansas State and Iowa State, for a final Conference record of 9 wins and 9 losses. Three really bloody defeats, those that would have moved the judgment on the season from “fifty fifty” to “positive” anyway: Texas at home, OSU and TCU outside. Matches with teams that are neither superior in size nor in talent, faced with too much superficiality, little attention and energy.

Out of 13 seasonal defeats, 8 accrued in the last possessions, of which 4 at extra time. Texas Tech has either clearly won this season or has seen its opponents win.

The technical reasons for this swinging season have been three. From the defensive point of view the first was the weakness near the backboards, which very often resulted in an advantage for the opponents who managed to catch many offensive rebounds and to have second chances to make a basket, while the second the precarious solidity that often allowed the realization of easy points in 1vs1 with and without the ball. From the offensive point of view, however, the Red Raiders had limited alternatives to the perimeter with the two players (Ramsey and TJ Shannon) more able to create advantage in situations of 1vs1, little inclined to put their companions in a position to take high percentage shots.

The Moro season has been in light and dark, complicated by the fact that this has not proved to be a suitable team to bring out its best qualities and abilities.

The effectiveness of each defense is directly proportional to the solidity of the men who guard the basket. Having behind your back Odiase with Owens is not like having Holyfield and Shannon behind. Having alongside the first offensive options ready to put you in the condition to take good shots like Culver and Mooney does not force you to have to create from the dribble or the pick and roll two actions on three playing an average of almost 35 minutes per game when you are considered the your team’s first offensive option.Taking these aspects into consideration, we can analyze the numbers of the #25 of Texas Tech which, in some ways, are even better than those of the season of the final, which even had been amazing. 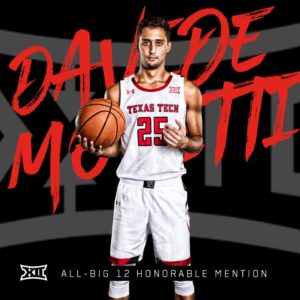 Davide received three individual awards this season, two of which received in the academic field, with his inclusion in the Academic All-district Award and in the Academic All-America Team. The most important from a sporting point of view is the honorable mention (All-Big XII Honorable Mention) to the ideal quintet of the BIG XII conference.

After the latest developments related to the story of the COVID-19 infection that is now affecting the whole planet, the BIG XII tournament and the final tournament of March Madness have been canceled.

The analysts of USA college basketball have tried to take the place of the commission that should have given rise to the scoreboard of the NCAA tournament, placing the Texas Tech University of Coach Beard and del Moro among the universities participating in the great ball, for the third consecutive year!